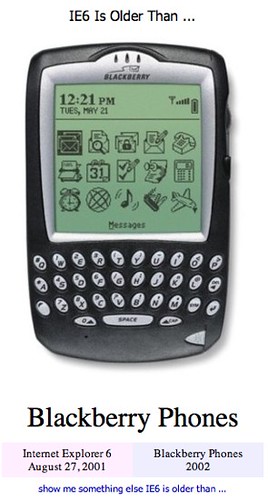 This post mentions IE6 everywhere, but it’s not about IE6 at all. In my standard rant on the three ages of web development, a standard sub-rant is our improved ability to develop on IE6:

I cite the 3,286 day old application as an example because it’s the one browser that’s still around and still must be targeted by a significant number of developers (despite the best intentions of even MS employees to “drive a stake into IE6s heart”, and thankfully, the number is starting to dwindle). It’s the 120-year old who’s witnessed the transition from horse-and-cart transportation, to men on the moon, and is still here today to speculate on the eagerly awaited ChatRoulette relaunch. We could ask how effective Netscape Navigator development is in 2010, but since no-one actually does that, any answers would be hypothetical. IE6 is something many people worked with pre Ajax era and something some people still work with post Ajax, so it’s a specimen that can be used to show how Ajax changed the world.

(You could do this kind of analysis for any platform, e.g. the design pattern phenomenon means that you would approach a C++ app very differently today than you would have in 1987, even with the same language and compiler.)

In the Ajax era, we made like engineers and got smart about how to do the best we could with the laws of physics our universe imposed on us. (Versus the new HTML5 era, where we build a better universe.) I decided to make this post to be a bit more explicit about why IE6 development is significantly better today than when IE6 came out. And by “better”, I mean faster and more powerful, if still a slow, frustrating, and not-very-powerful development cycle compared to the modern browsers.

With no further adieu, IE6 development is better today than in 2001 because …

9. Knowledge JavaScript was allegedly the world’s most misunderstood language in 2001. Now it’s well-understood, good parts and bad. And so is the DOM. An abundance of blogs, forums, books, and conferences.

8. Patterns We not only know how Javascript and the DOM work, we have idioms, patterns, and best practices for putting it into action.

7. Performance IE6 is orders of magnitudes slower than today’s browsers, so managing performance is certainly important, and these days, we know much more about how to make web apps run faster, thanks to the efforts of Steve Souders et al.

6. Tools Tools from MS and others have come along over the years to improve the development experience. Firebug or Webkit Devtools they are not, but at least IE6 debugging is more than just alert boxes these days.

4. Show Me the Source We now have plenty of examples to learn from, both online, where View Source is your friend, and in the open source code repositories of the world.

3. Browser Mechanics We understand the quirks of each browser much better now, and that certainly includes the many well-documented quirks of IE6 and how to deal with them.

2. Attitude Those examples also overcome the psychological barrier, a key impediment to IE6 development. In the absence of any decent examples, it was easier for developers to shrug their shoulders and say it’s all too hard. If that sounds too mystical, see 4 minute mile. “Ajax” is more than a set of technologies, it’s also the recognition that these kinds of apps are possible.

1. Development is Just Easier These Days. No matter what kind of development you’re doing, development is just easier in 2010. Blogs, Forums, Twitter, Code Repositories, etc are improved, so this will impact on IE6 development or any other form of development, though there’s a law of diminishing returns here.

IE6 development is still a tough effort and thankfully becoming less of a requirement as people shift to modern browsers, or at least IE8. You know a browser is on its way out when “because employees are less likely to use Facebook” is one of its most compelling advantages. The Ajax era had a profound effect on the way we develop and what we know to be possible, but that era is mostly over, and that law of diminishing returns is kicking in hard. Hence, we make a new, better, platform to keep progressing what’s possible.

Will the rush of HTML5 work make IE6 development in 2020 even more doubleplusgood than in 2010? Not really. There will be a few odd improvements, but overall, HTML5 is about improving the platform, which means developers will increasingly be focused on doing things IE6 will thankfully never even try to do. The HTML5 world subsumes the Ajax world, so you get the double benefit - all of these ten Ajax benefits multiplied by all of the new features of the platform.