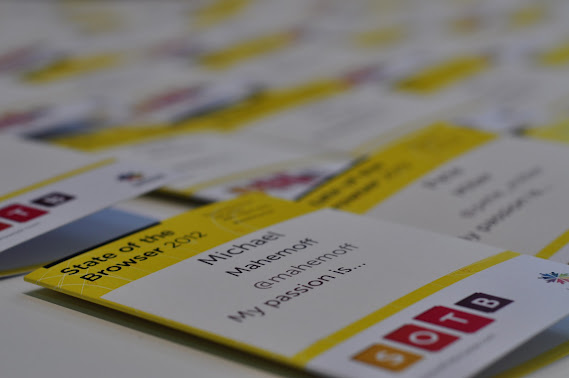 I was at State of the Browser 2 yesterday, an event comprising reps from the browsers. I’m happy to be part of this event as I think it’s valuable for the web as a whole for devrels to get together with developers in this way. The browsers do spend a lot of time talking to each other about specs etc in meetings and mailing lists, but at State of the Browser, they’re facing the developers. So straight up, thanks to the organisers for doing a great job running this great event again. 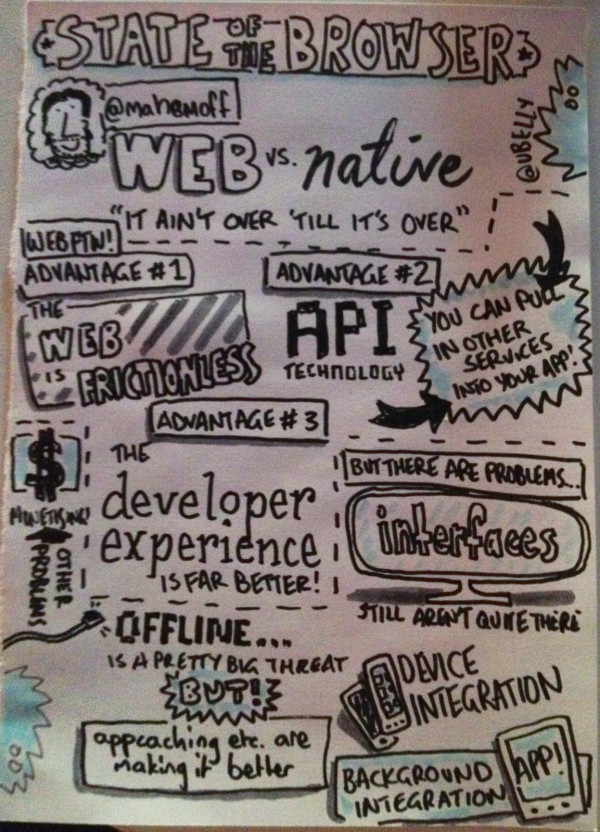 Thankyou for the sketchnotes UBelly :)

Slides for my keynote talk on Web vs Native are here. I’ll highlight the four challenges of the web which

In order of increasing threat, I mentioned:

I also mentioned monetization and competing standards as additional threats, only reason I didn’t cover them in detail is time. I did mention a little of it in the recent bonus HNPod episode on HTML5 vs Native and we had a Twitter conversation about it yesterday.

Remy blogged all the morning talks and raised some questions about each.

Is the point: browsers don’t matter – the web does…?

The underlying assumption is that the web matters more than any individual browser.

Should the browser just be the webview?

No. Browsers add a lot of value beyond the web view. One of many examples is customisation via preferences and extensions.

“You’re not on a fucking plane” – but then do all devs know how to build apps like gmail where it’s insanely quick because they know how to work the mobile device?

Agree. It’s hard right now. And even harder if you wish to use the same core app for both online and offline (as well as desktop and mobile).

AppCache is not a replicatement (sic.) for localStorage – far from it.

Is there a larger problem that the browser (and a pro) exposes data if the user wants to get to it. It makes SSO harder because of security, etc?

Yes, but just like camera access, geolocation, etc, you can handle it with permissions. If HTML5 doesn’t stay competitive with native on SSO, background apps, etc, it’s not going to be a modern platform for apps. There’s enough UI widgets already, it’s these peripheral aspects — those where security is an issue — where native is surging ahead. You can either do basic websites without app-iness or you can do apps which use the full range of possibilities available in a modern device and operating system.

Web vs. Native seems like two issues: browser and the web. Browsers being the limitation

Both as we’d want web standards too for whatever the browsers offer developers. But definitely down to the browsers and possibly the OSs when you consider SSO for example.

The panel I moderated. Devrels from four browsers and the forbidden fruit. (via james_smith88)