Here’s what’s going on with AjaxPatterns.org and the O’Reilly Ajax Design Patterns book. Many of you have mailed about this and many others asked at the conference, so this post is probably long overdue.

I finished the book a few months ago, and it’s available for sale now in Rough Cut form. It was originally planned to be an “Animal” book, hence the bird dude depcited below, but because it has a fairly unique look and feel, it will now be part of the Theory In Practice series. So enjoy the birdie while it lasts.

People at the Ajax Experience were asking about the book, conspicuously absent on the book stand, and the fact is it’s taking a while to get into physical form for several reasons. Most importantly, I’m firmly committed to the idea that any physical pattern book needs to be highly visual - people should be able to flip through the book and see what the patterns mean in a blink. So there’s a huge amount of diagrams and screenshots that the creative people at O’Reilly are working on, and I’m really happy with what they’re outputting:

The electronic Rough Cut edition contains my extremely “rough” diagrams, which serve as instructions for the illustrator and will eventually make a nice historical manuscript. 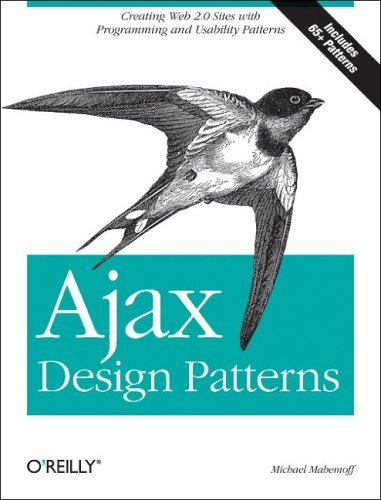 I’m pulling it down so the book sells well.

But if I can be serious for a moment, the site will remain online with all content intact. It has always been, and remains Creative Commons, and if I had to choose between the wiki and the book, I’d take the wiki every time. It’s staying online for the long haul, and I want to make it better than ever. These are my plans, let me know what you think: