Here’s just a few random thoughts on Black Mirror Bandersnatch, which came out yesterday. I’d have posted these as a few lazy tweets, but didn’t want to post spoilers there.

Haven’t watched it yet? Congratulations, you have a life. But go watch it anyway. Binge the first four seasons beforehand if you haven’t seen them yet. Also worth it.

Thoughts with some very mild spoilers ahead: 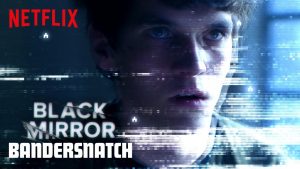