Here are the slides:

Slides: What Everyone Should Know About REST 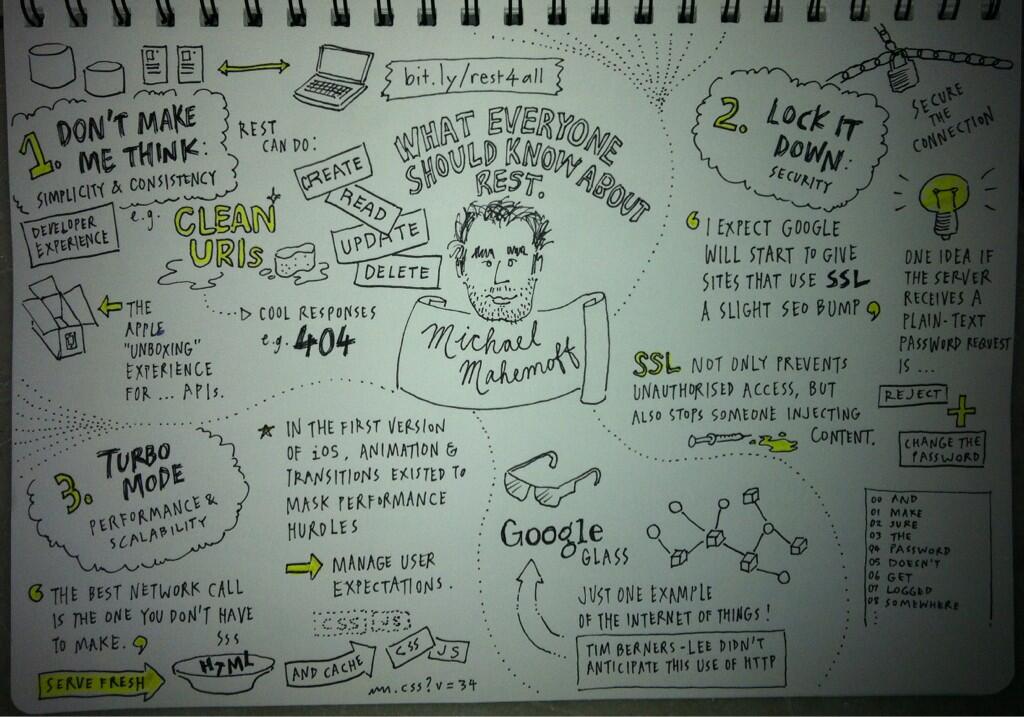 Thanks UX Mastery for the sketchnotes, they are awesome! (Seriously, I would be much more swayed to speak at any conference with sketchnotes because it’s a straightforward permanent memento, a better snapshot than slides or video.)

Overall, it was great to be associated with another fine Web Directions conference and the Melbourne Town Hall venue was amazing. I only regret that we were so busy scrambling on the Android app, after launching just a few days earlier, to be around the whole time. But this being my hometown — I’ll be back!

I spoke at Web Directions Code on Friday, a talk on REST. I’ve been putting a lot of this into practice lately, and the talk was really an attempt to convey the main practical things every developer should know. The structure was:

← Defer and Recur with Rails, Redis, and ResqueJavaScript swims downstream with the web →

Welcome to Michael Mahemoff's blog, soapboxing on software and the web since 2004. I'm presently using HTML5 and the web to make podcasts easier to share, play, and discover at Player FM. I've previously worked at Google and Osmosoft, and built the Ajax Patterns wiki and corresponding book, "Ajax Design Patterns" (O'Reilly 2006). For avoidance of doubt, I'm not a female, nor ever have been to my knowledge. The title of this blog alludes to English As She Is Spoke, a book so profoundly flawed it reminded me of the maturity of the software industry when this blog began in 2004. I believe the industry has become more sophisticated since then, particularly the importance of UX.

The Art and Science of Javascript,
Firebug Chapter